Printed on fabric to cut, sew and stuff, this type of doll was made by dozens of companies. A prominent one was Art Fabric Mills in Fort Plain, N.Y.  Readily found are cloth dolls that have endured for a century and more, stamped on the bottom of one foot,  Art Fabric Mills  Feb 13Th 1900.

One of these, a little black child reached out for me at the antique show here in Fredericksburg a few weeks back. It was more expensive than it should have been, obviously needing help with a stuffing issue.  Several examples can be seen on the web dressed as a boy, such as this one from The Brooklyn Children's Museum. With the full hair style, I think the doll could be dressed as a boy or a girl as the owner might wish. 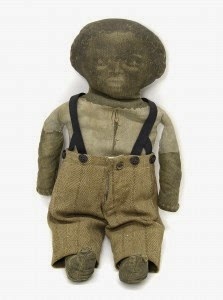 The example I bought had been originally hand sewn with a heavy black thread in a neat manner and stuffed with course wood chips. The wood chips had shrunk over time and a slash at the back of the neck was made by some misguided person who added a lot of cotton and sewed the slash back very roughly.  I took some time carefully removing all the wood chips possible. This picture shows the filler and the original stitching of a side seam. 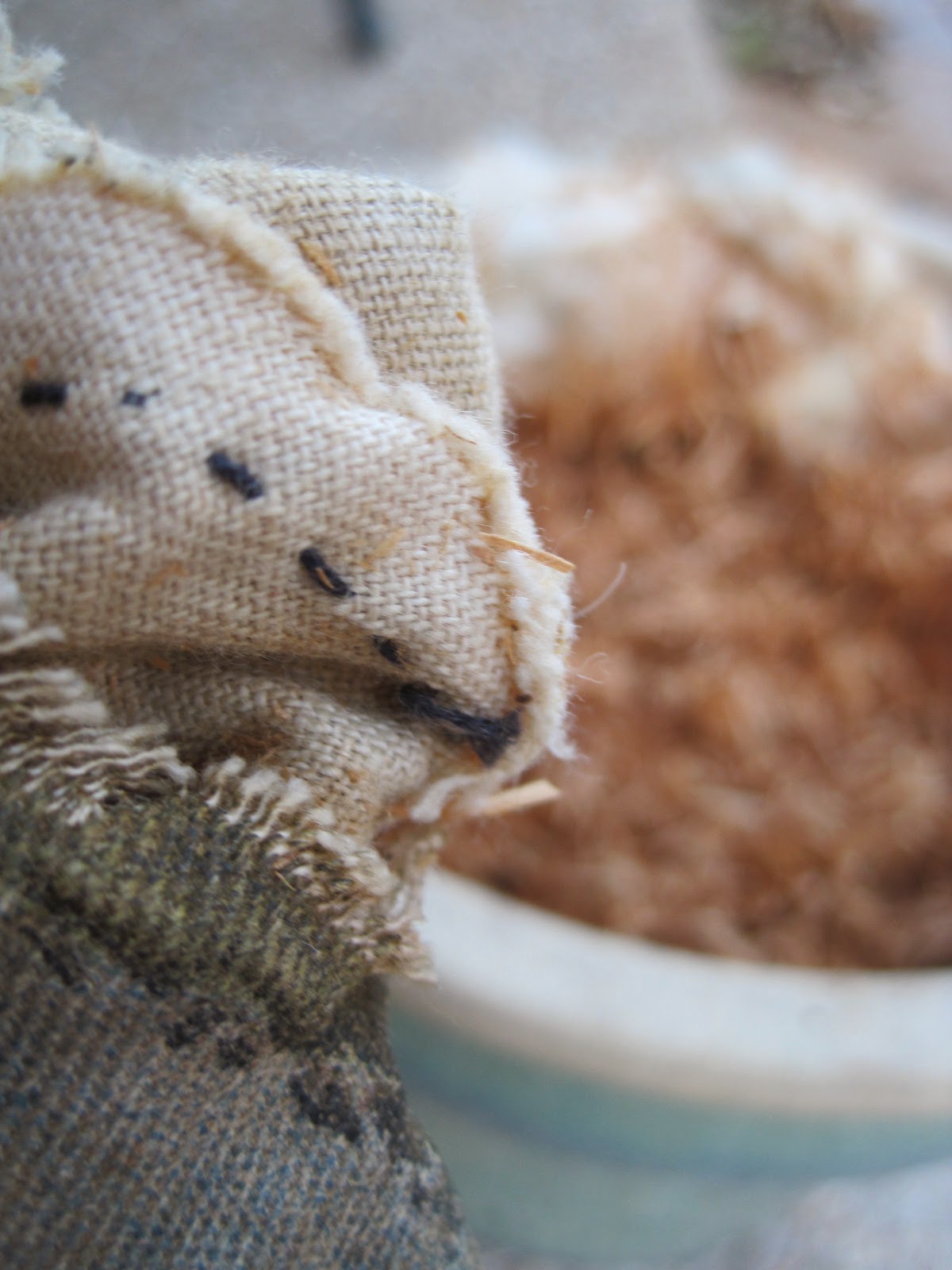 Those doll people who have read my opinions on sawdust, wood wool, excelsior and other such products for stuffing a doll or a bear know that I am persuaded the fabric dolls and bears so filled are all in peril from this type of stuffing which puts out acid fumes and rots the fabrics.  I offer as evidence to prove this the large number of china headed dolls from the end of the 19th century with browned and rotting or already falling apart sawdust stuffed cloth bodies.  Consider all the Teddy bears selling now for thousands of dollars. Most of these are silently self destructing and becoming crunchy and rotting slowly.  Not so the doll bodies stuffed with horse hair or cotton or rags.
I stop short of recommending emptying and re stuffing old dolls and plush toys, as subjecting them to this could prove terminal for them. Since this printed cloth doll was of strong fabric and I was working with it already to remedy its limp condition, I decided to remove all of the wood chips and re stuff with clean natural cotton. Poly fill such as I use most of the time on new work would have been very unsuitable. Poly compresses in a springy fashion and continues to push outwards on its container. This would put a constant stress on old fabric!  I worked patiently at the re stuffing, making a number of small wads of cotton and then inserting them one after another into the little figure, and repeating, more or less molding the contours of the doll as I placed the stuffing.  Expectations of shaping this doll have to be tempered by understanding it is made of two flat pieces sewn together and will not make a fully round doll. 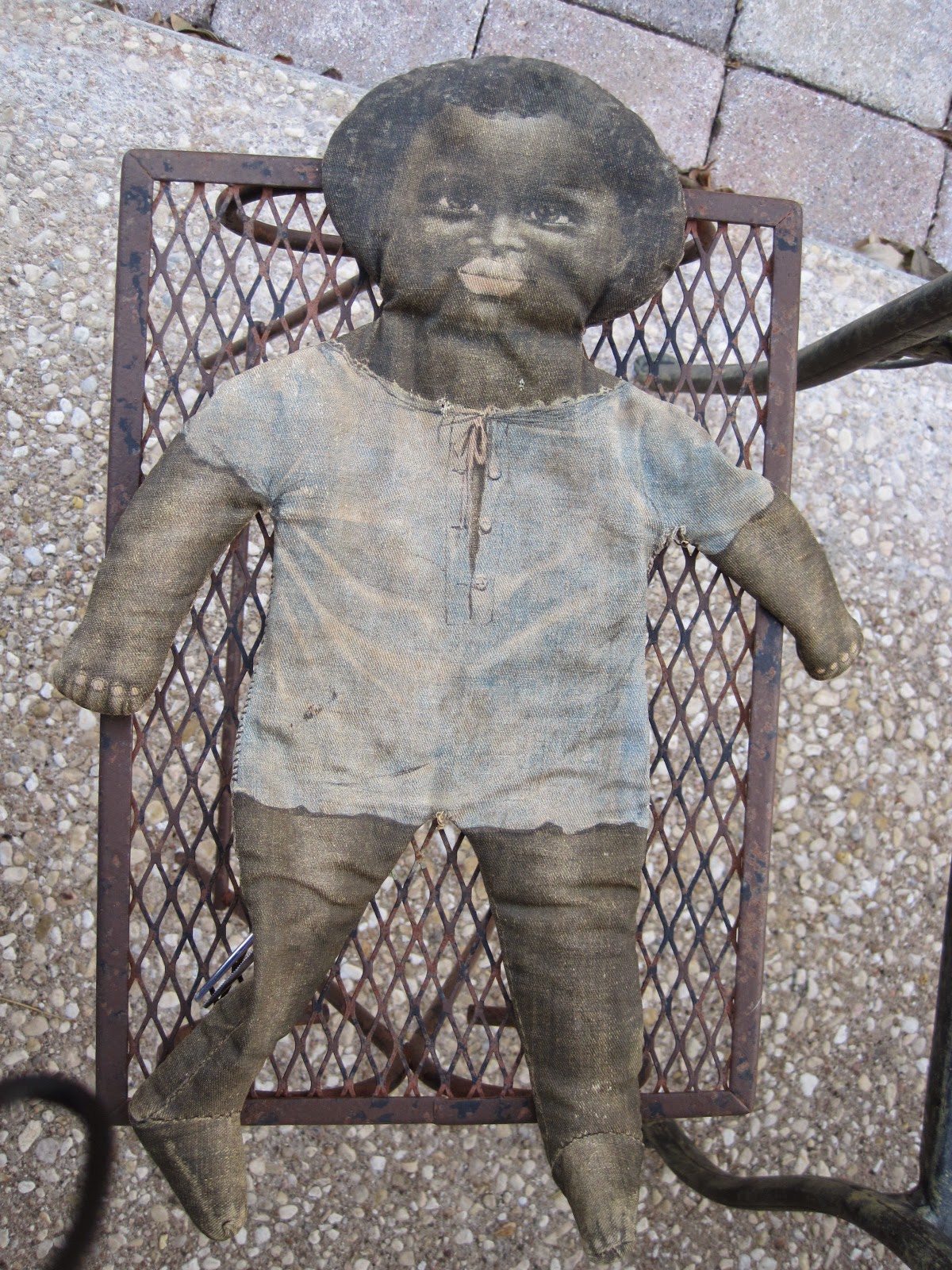 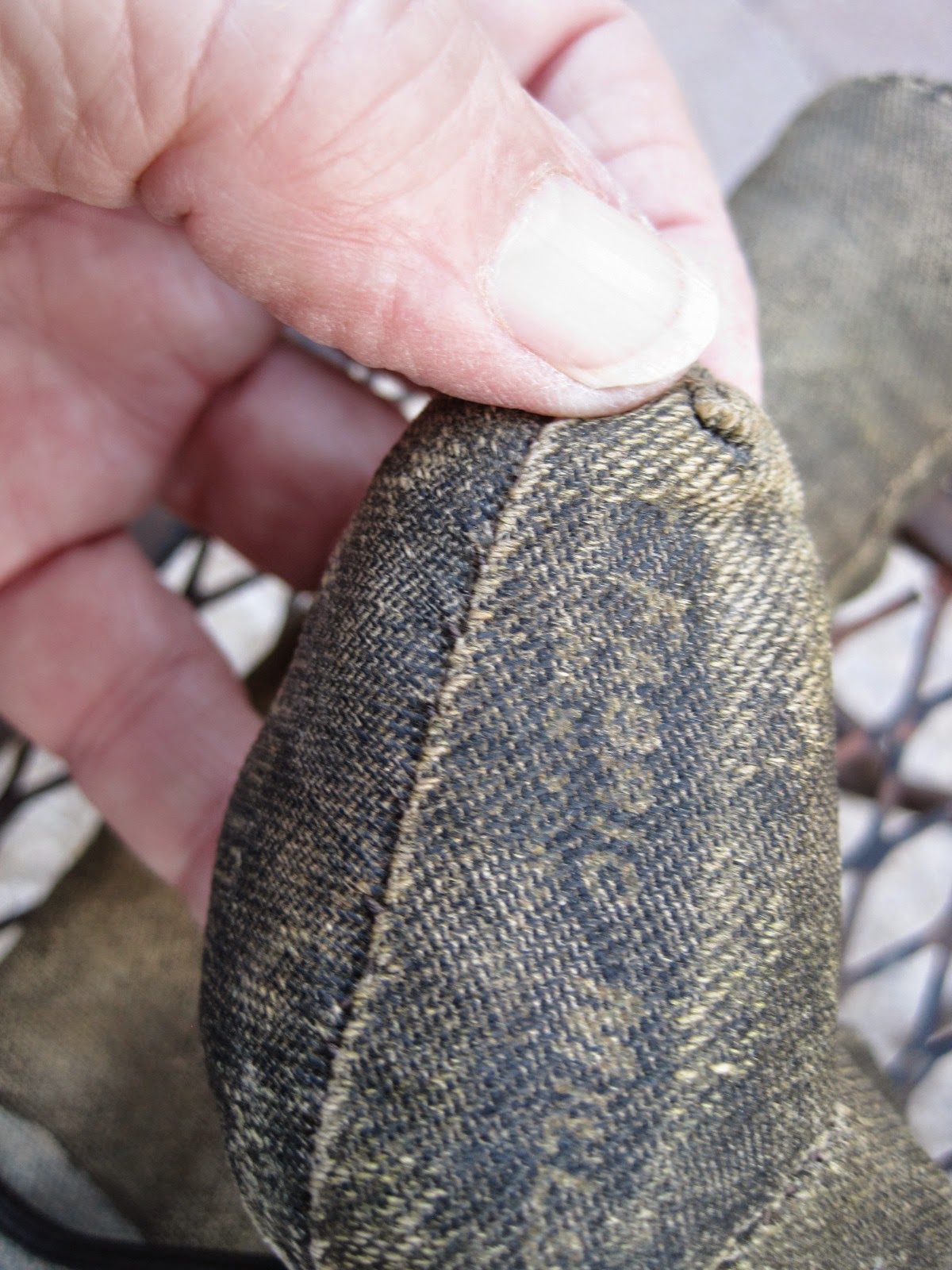 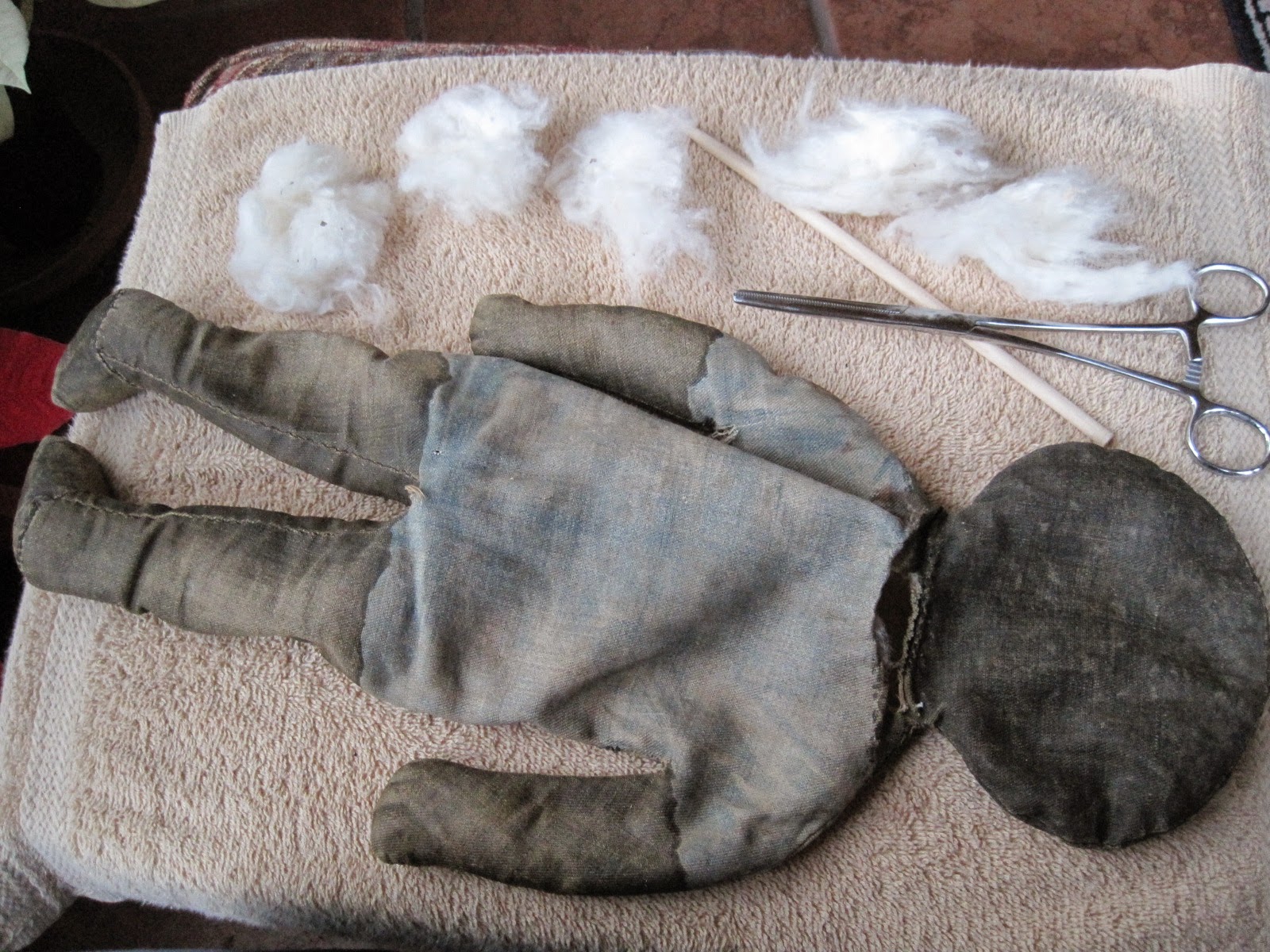 The slash at the back of the neck was closed again by placing a fabric patch of soft flannel under it and sewing the slash shut with edges just touching not overlapped.  It appears this opening may have been a tuck intended on the doll originally.  A side seam was used for stuffing on this one and that stitching remains.  I know I could have made the mend much less visible with the use of a wash of dark acrylic paint, but that seems less honest in some way.  Consider the oriental rug that has been doctored with red or blue markers to cover worn spots.  I am pleased with the doll.  I will probably display him/her on a wall hanging among other textile pieces like doll quilts and sewing rollups.  Now all I need is the wall space! 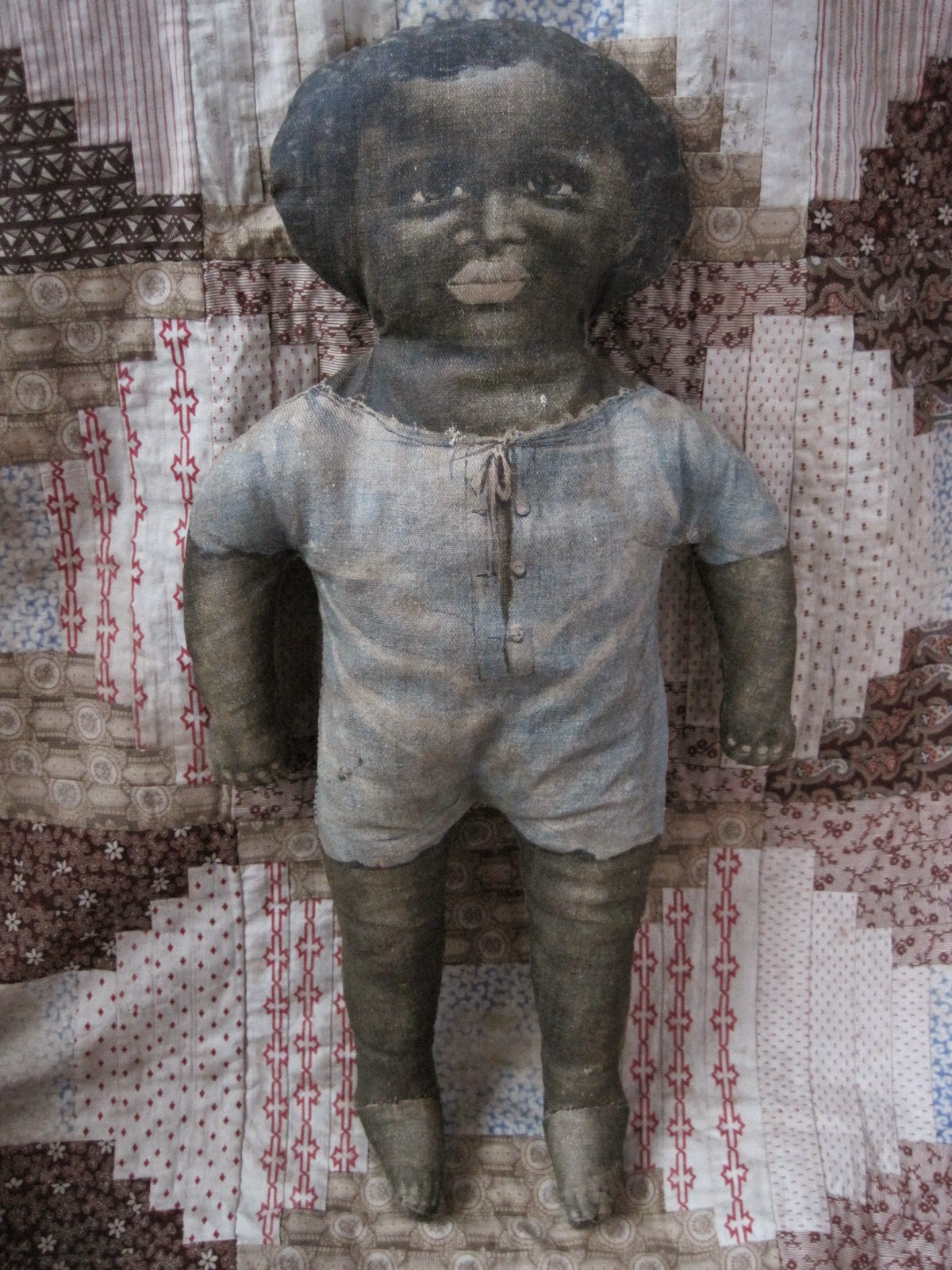 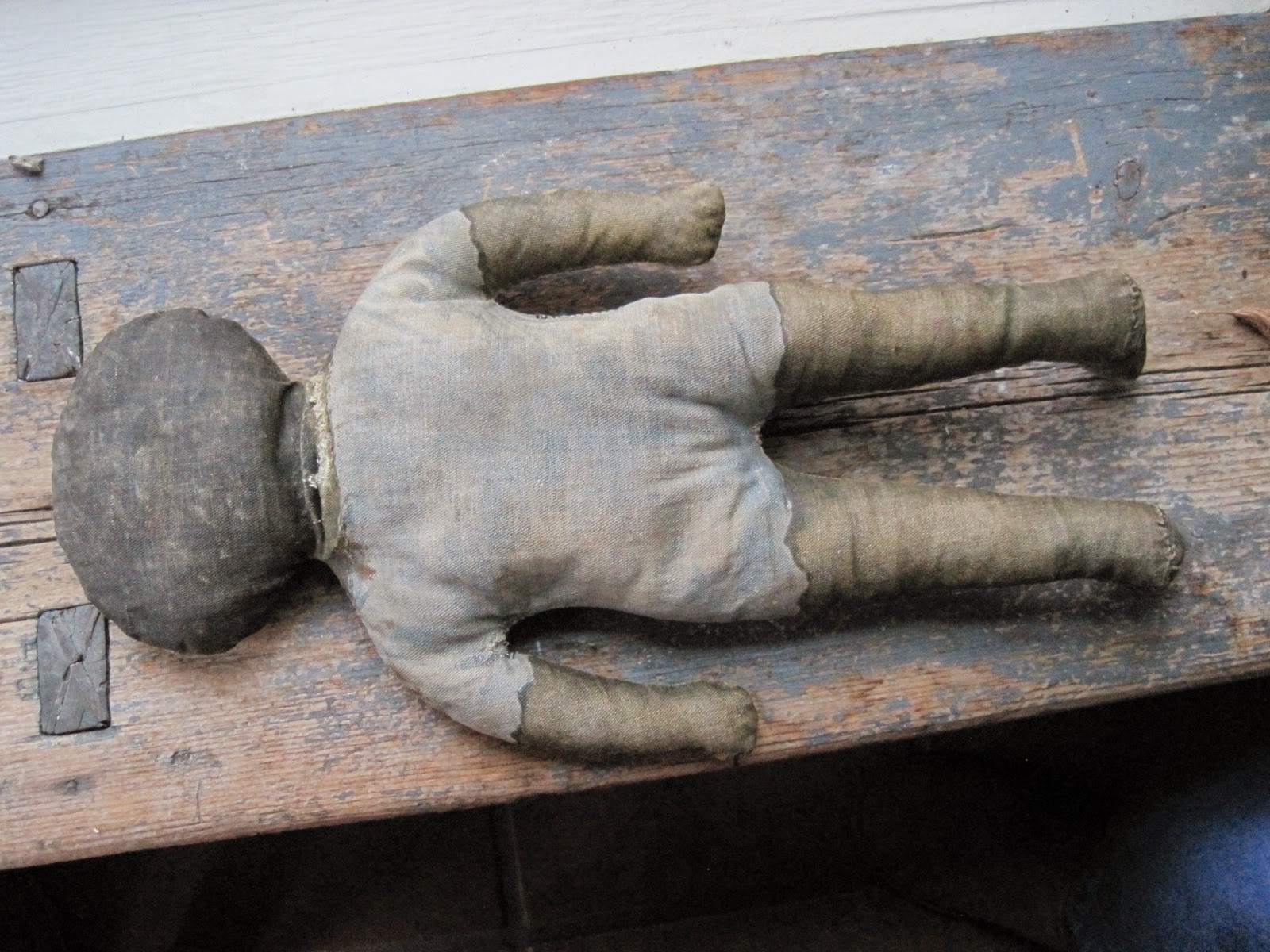 Dixie Redmond had one of the Art Fabric Mills dolls. 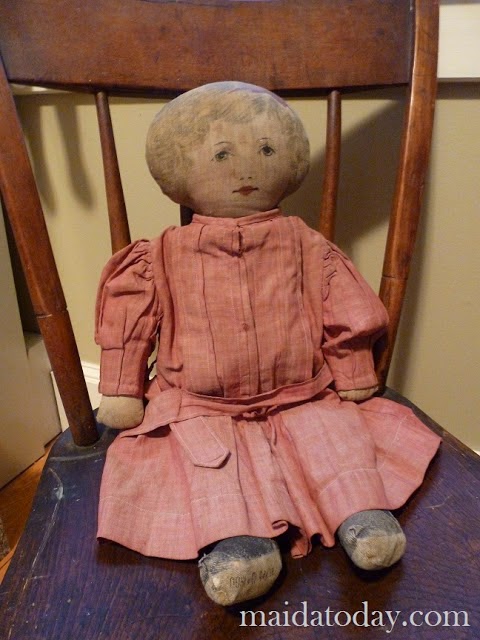 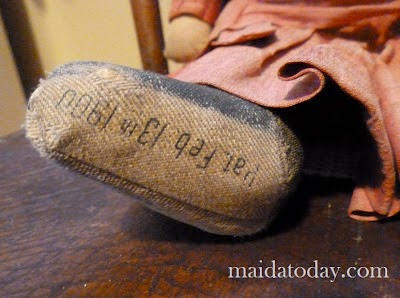 There were a large number of them made of many different characters. One I would love to have is "Cry Baby Pin Cushion" !  e 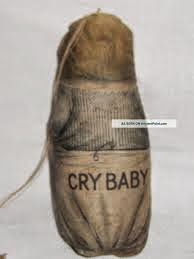 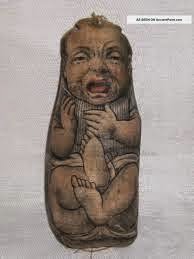