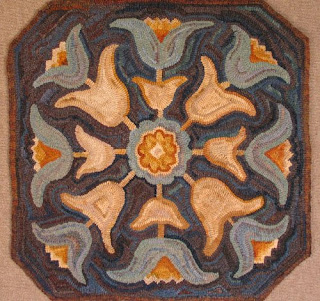 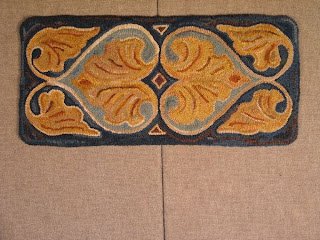 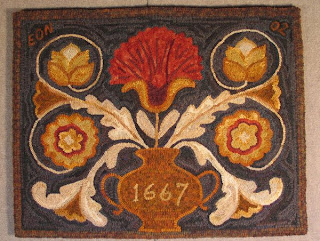 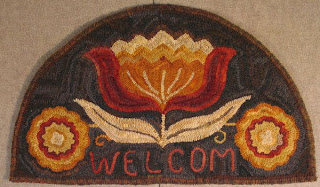 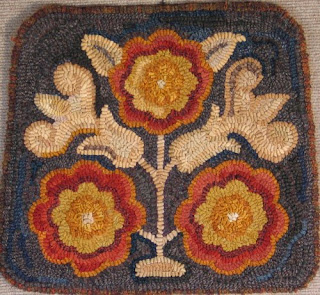 Rachael wrote asking what I meant by a new Hadley rug, here is my letter back:

Dear Rachael, In the development of a separate American culture, English and other furniture traditions evolved here into a new and clearly different genre. In the 1600's and 1700's a distinctive style of carved and painted furniture was made in the New England colonies by a number of individual furniture makers or "joiners" as they were called. Most of these earliest pieces were oak chests, but Bible boxes, a few high back chairs and other pieces also received the carving and painting in deep colors of indigo, red and black and ochre. A notable table in the collection of Historic Deerfield has the distinctive carving on the apron. The early colors have worn away from most of the furniture and only tantalizing traces of color remain on a few examples but there is enough to know what these historic colors were!

As Americana collectors began to study and acquire this early New England furniture in the 19th century, the related objects were studied and similarities noted and bits of documentation pieced together. It was possible to identify some of the early towns and even craftsmen responsible for this work. The pieces of furniture were documented and referred to often by the place names where they were discovered. Thus one noted collector referred to a great carved storage box as "my Hadley Chest", naming it for Hadley Massachusetts where he had found the chest. Broadly, the furniture became known as "Hadley Type" and was made principally in the Connecticut river valley from Wethersfield Connecticut to Deerfield Massachusetts.

I have treated these and other related early carved furniture designs as documents of early American decorative art, and translated them to designs for rug hookers, particularly those who enjoy early motifs to complement pilgrim furniture, but the strength of these historic motifs transcends my first narrow purpose and they hold their own as beautiful in almost any setting today.
My group of Hadley rug designs includes a number of examples, including "Guilford Runner", taken from a Bible box found in Guilford Connecticut, and "Ipswich" taken from a great carved back chair. There is "Candle Mat" with the ubiquitous opposing hearts, and a "Tulip Wheel" design taken from the front of another carved chest. There are the chair pads "York", "Coventry", "Windsor" and "Greenfield". The half round "Hadley Welcome" rug is a favorite. This one hangs in my entry hall.
New this year is another Hadley design, "Cape Ann", a rectangular rug to be offered in two sizes by Barb Carroll whose company distributes all of my designs. I am excited about adding it to our home and hope it will also be enjoyed by many friends in the rug hooking community. When the rug is underway in a few weeks, I will picture it here. Edyth
Posted by Edyth at 9:53 AM